The U.S. Navy wants to acquire its next surface combatant – the future Guided Missile Frigate FFG(X) – in FY2020. The FFG(X) is intended to buttress the lower cost, lower capability component of the U.S. Navy’s 355-ship force level goal established in 2016. The U.S. Navy intends the FFG(X) to be a multi-mission ship conducting air defense, anti-surface, anti-submarine and electronic warfare operations. The FFG(X) will operate in lower-threat environments than destroyers, yet significantly higher-threat environments than ever considered for the Littoral Combat Ship (LCS). The U.S. Navy would prefer procurement of the first ship coincide with the last LCS, with appropriations beginning in FY2020. Therefore, an accelerated acquisition strategy is necessary due to the shortened procurement lead-time, i.e. two years from today to issue a Detailed Design & Construction (DD&C) contract in FY2020 for the lead ship.

Historically, it has taken U.S. ship designers four to five years to design a new surface combatant from scratch. Applying this design standard would delay first ship procurement until at least FY2023. To shorten acquisition timelines, the U.S. Navy is recommending an accelerated acquisition concept known as a parent ship design strategy. The parent ship design concept is predicated on the modification and adaption of an existing ship design, thereby shortening the concept and design development phases of acquisition (in this case, the FFG(X)). The concept has been done before, but never for a modern-day, multi-ship combatant. Further, the U.S. Navy stipulates that the new design must be based on an existing hull form that has gone through production and proven herself “at sea”. In addition, to minimize technical, cost and schedule risk, the U.S. Navy further stipulates that no new technologies or systems will be developed for the FFG(X).

The U.S. Navy intends to conduct a full and open competition to select the builder of the FFG(X) and will include proposals incorporating the parent ship design concept from either U.S. or foreign ship designs. The U.S. Navy anticipates that up to five teams will participate in the development of conceptual designs and compete for the final DD&C contract award.

The Navy intends to award a single DD&C contract for the first ship in FY2020. Regardless of the hull form selected, significant design work will remain to meet U.S. Navy MILSPEC and survivability requirements. The design will also need to incorporate the requisite U.S. Combat Weapons Systems (CWS) necessary to meet fleet interoperability requirements. The U.S. Navy has stipulated that the ships will be built in a U.S. construction yard which will necessitate design modifications to translate the ship design into a specific build plan – each build plan unique to a particular U.S. shipbuilder.

The graph below illustrates the existing combatant landscape highlighting price point versus displacement as well as the U.S. Navy’s expected target price point of $950M (2018$) for follow-on FFG(X) ships (i.e. ships 2 – 20). One would surmise that the most likely displacement for the future combatant would be in the 4,000 to 6,000-ton range, based on historical U.S. shipbuilding methods and labor rates. At this displacement and given U.S. Navy stipulations, there are a number of viable indigenous and international ship designs that could meet the target price, but none are without deficiencies. 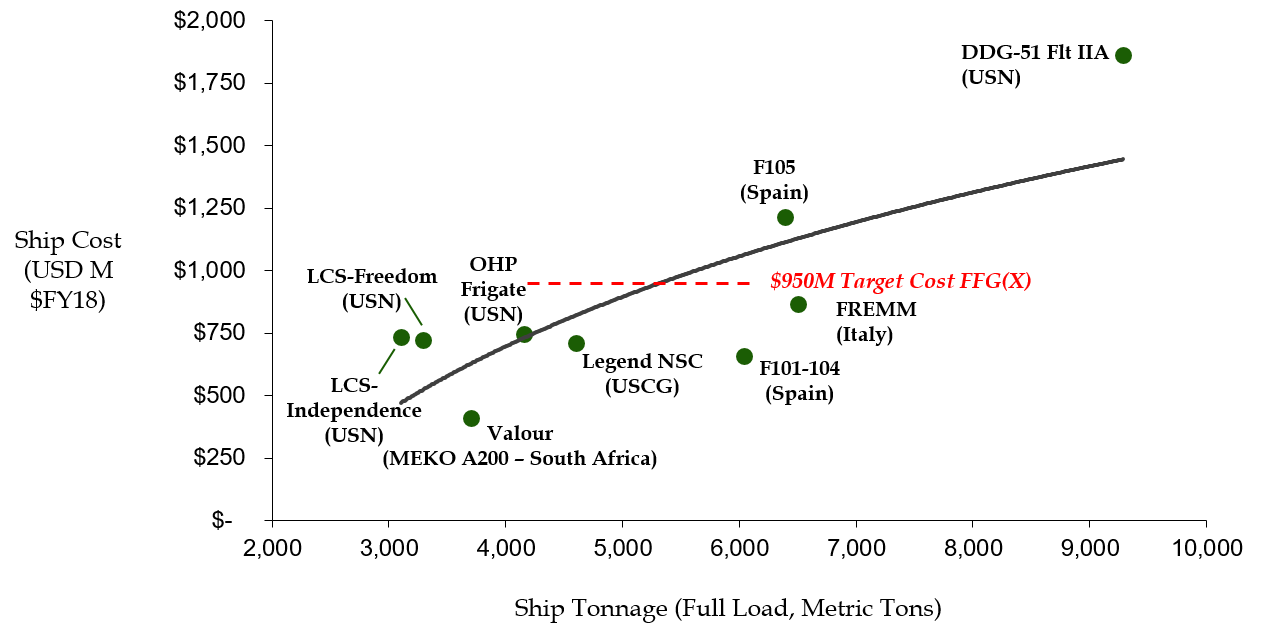 Looking through the plausible set of U.S. ship designs, one must start with the combatants currently under construction including the LCS with both the Independence-class and the Freedom-class hulls and the Arleigh Burke-class Aegis destroyer (DDG-51). We would argue, any potential advantage these existing ships have can be reasonably discounted due to the intrinsic mission defined for the new FFG(X) ship class. For example, the Arleigh Burke-class is twice as expensive with twice the displacement being uniquely designed for high-threat environments and unlikely to squeeze within the designated affordability envelope. Likewise, the FFG(X) mission has evolved away from the LCS hull forms since early guidance planning (2010 – 2012) and the findings of the Frigate Requirement Evaluation Team in 2017. Our read of the Frigate Assessment Team’s findings all but eliminate these hull forms as a logical choice due to the increased requirements in ship’s survivability, lethality, endurance and total ownership cost parameters as stated during the Industry Day conference last July.

Other relevant indigenous ship designs include the Legend-class, the U.S. Coast Guard’s National Security Cutter (NSC), which comes in at 4,600 tons. However, concerns remain around the Legend-class’ ability to meet the U.S. Navy mission survivability requirement, although the planned operational tempo of the Coast Guard vessel should provide greater confidence in its sustainability and lifecycle ownership costs. A second option, the recently retired Oliver Hazard Perry-class frigate (OHP), at a full displacement of 4,100 tons could also be an option, but studies over the years have probably marginalized this design as a viable option for the next-generation future frigate.

A similar review of the plausible international ship designs indicates that most of the viable ship designs (e.g., German MEKO A200-type frigate, Italian or French FREMM-type frigate, or Spanish F-100-type frigate) would most likely require adapting to a slightly smaller, narrower mission set. This is due to the fact that international frigates tend to play a broader, heavier role within their respective navies than that envisioned for the FFG(X) in U.S. Navy fleet operations.

A few of the international ships would appear to be advantaged due to the potential for residual design margin, based on displacement, for future mission growth which historically plagued past U.S. frigates that were designed with essentially zero design margin. A critical factor that should be considered is the amount of reserve margin in the FFG(X) ship design. Throughout the decades of its service life, the FFG(X) should be expected to gain new systems and capabilities through modernization or upgrades. Thus, the flexibility to add future mission capabilities would make some of the larger designs more attractive. But more importantly, we note that all the plausible parent ship designs would need substantial change-out and offloading of existing payload, sensors and armaments to achieve the level of commonality and interoperability within the existing U.S. naval force structure.

We would argue that on the surface there appears to be a pretty level playing field at the start of the U.S. Navy’s full and open competition for its next-generation future frigate. No existing baseline design is a perfect match and all parent ship designs will need to undergo significant modifications. It would also appear, more than plausible, that the U.S Navy’s next surface combatant design could conceivably be based on an international ship design. Although there may be resistance to using an international parent design at first blush, ultimately this may be the most cost effective and efficient way for the U.S. Navy to meet its acquisition timeline, affordability envelope and performance goals.

An equally important aspect, unrelated to the parent design choice, will be considerations for the future surface combatant industrial base. Specifically, the health and sustainability of the national shipbuilding industrial base as well as retaining and sustaining the indigenous engineering and design competencies for future surface ships must be considered. While several other ship classes are ramping up production (Ford-class carriers, Virginia-class and Columbia-class submarines and Arleigh Burke-class destroyers), the LCS ship production will be replaced by the new FFG(X). Specifically, there are two shipyards currently building LCS vessels, but there will only be one FFG(X) design produced. The Navy will need to consider what shipbuilding capacity it needs, specifically to satisfy its low-cost, lower-capability mission set, so as not to cause unexpected bottlenecks or collapse its industrial base.